The workshop programme is available here 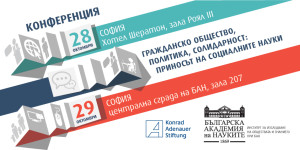 In Sofia, Bulgaria
On 24 October 2013
In the conference room of the ISSK-BAS
“Serdika street”, No 4, II floor

The Institute for the Study of Societies and Knowledge and the University of Zurichof are preparing a conference devoted to the issues of Democracy and Populism on September 12-15, 2013 in Sofia.
Our comprehension is that European democracy nowadays is challenged by the heritage of a ‘divided continent’ – divided by experience and memories of the (totalitarian) past, and the current wave of populism and its implications for national and European governance. The first aspect involves the pursuit of ‘unity in diversity’ and the second aspect involves the perception of the roots and implications of the contemporary populist mobilization across . The conceptual and theoretical challenge is to link these two challenges to European democracy, i.e. to formulate theses that allow to identify the cultural, political and socio-economic roots of the current populism, and to show their joint impact on the perspectives for a future ‘unity in diversity’. Formulated somewhat differently the challenge for European democracy is how to reinvent democracy to cope with the European multi-level system of governance, which is characterized by an extraordinary discrepancy between the cosmopolitan political elites and the culturally very diverse national populations.

We would like to concentrate on discussions on how different historical experiences, memories, and political cultures shape current political debates and populist mobilizations in the European public space and what their implications are for the degree of consensus/dissensus with respect to Europe and the future of democracy in Europe both, within national citizen public and national political elites as well as between them.

Second International Conference on the Middle Class
“The Middle Class as a Precondition for the Stability of Society: Fifteen Years Later”
The conference commemorates the 60th anniversary of the birth of Prof. Nikolai Tilkidjiev

All of you who would like to participate are asked to send the title and abstract of your paper (up to 150 words) by September 30 to:
dimitrina.popilieva@gmail.com and mayakeliyan@gmail.com

Programme of the conference

The Institute for the Study of Societies and Knowledge at BAS and the Department of Philosophy at the University of Liege, Belgium organize an international workshop
Whitehead after Process and Reality

Programme of the workshop